Ciudad Colonial (Spanish for “Colonial City”) is the historic central neighborhood of Santo Domingo and the oldest permanent European settlement of the Americas. It has been declared a World Heritage Site by UNESCO. It is also known as Zona Colonial (Colonial Zone) or more colloquially as “La Zona” (The Zone) . The Ciudad Colonial is located on the west bank of the Ozama River, which bisects the city. It covers 1.06 km2 (0.41 sq mi) bounded by a walled perimeter. It is an important section of the city due to the high number of landmarks, including Alcázar de Colón, Fortaleza Ozama, Catedral de Santa María la Menor, and others.

The first settlement of what is now Santo Domingo was established by Bartholomew Columbus on the East bank of the Ozama River near the end of the XV century. After the 1502 hurricane that claimed Francisco de Bobadilla among its victims, however, the city was relocated on the West bank under the leadership of Nicolás de Ovando. Ovando and his successor Diego Colón presided over the first constructions of the Colonial City, many of which still exist today. Santo Domingo’s fortifications were an important feature of the urban landscape. The defense wall (muralla) extended from the Ozama River to the Puerta del Conde, which was the entrance to the hinterland and the Western boundary of the city until the late 19th century.

The Spaniards used this settlement as the first point of influence in the Americas, from which they conquered other Caribbean islands and much of the mainland of the Americas. Santo Domingo was initially the political and cultural hub of Spanish presence in the new world, but after a few decades started to decline as the Spaniards focused their attention more on the mainland after conquering Mexico, Peru, and other regions of Latin America. Ciudad Colonial nevertheless remained an important historical site.

In 1655, the Ciudad Colonial was submitted to a siege led by the English officers William Penn and Robert Venables. The 1655 invasion was thwarted by Spanish troops commanded by the Captain General of the Colony, Don Bernardino de Meneses y Bracamonte, Count of Peñalva, to whom the Puerta del Conde (“Gate of the Count”) is named after. The defensive wall was modified during this episode. Prior to the invasion, there was a fort at the site where the Puerta del Conde is today, Fuerte San Genaro. It is believed that the modification that occurred after the siege involved the expansion of the wall to the fort, effectively creating a bastion, El Baluarte del Conde.

In the late 19th century and early 20th century, the city started to expand beyond its old boundaries, but the Ciudad Colonial remained the main hub of activity until the Trujillo era. Trujillo also presided over the restoration of major monuments, including the Alcázar de Colón in the early 1950s. 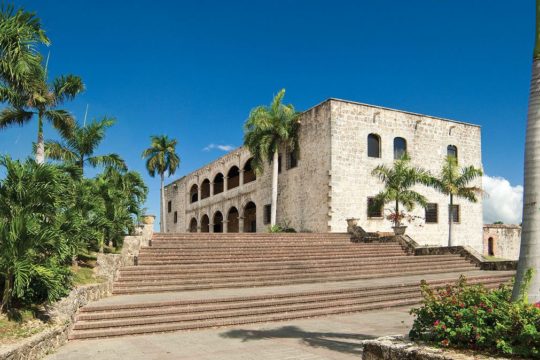